The Parody Wiki
Register
Don't have an account?
Sign In
Advertisement
in: Jakers!: The Adventures of Piggley Winks Characters, Females, Characters,
and 19 more

Ciara (pronounced Key-ra), also known as Mom, is the daughter of Piggley Winks and his late/ex-wife, the mother of Meg, Sean and Seamus, the niece of Molly, the granddaughter of Padrig and Elly and is a supporting character in the 2003-2007 British-American series Jakers! The Adventures of Piggley Winks.

She lives in a small bustling town in America with her father and children. Ciara will sometimes listen to her father telling her children about his childhood in 1950s Ireland (which he told Ciara herself about when she was younger). Like the stereotypical mother, Ciara dislikes her children staying inside the house all of the time and will encourage them to go outside to play.

She was voiced by the late Russi Taylor, who also voiced Ferny Toro and Elly in the series. 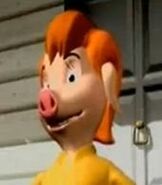