Cindy Lou Who is a sweet young girl from Whoville and one of the main characters from the computer animated Dr. Seuss' The Grinch. She is voiced by Cameron Seely, who was in the movie The Greatest Showman.

This version of Cindy Lou Who is different than her 1966 and 2000 version. For example, Cindy-Lou Who likes to go on adventures, and hang out with her best friend, Groopert. And she plots to capture Santa Claus to thank him for helping her single mother every Christmas, something which will interfere with the Grinch's plans. Like her previous version, she does love Christmas. But her single mother have been working so hard with her and her twins brothers, Buster and Bean. So she decided to write a letter to Santa by wishing that she want her mother to be happy and spending time with them on Christmas.

She is a glitch who is the princess of Sugar Rush

Cindy Lou Who played Sophiana in Christmas Is Here Again

She gets adopted by Santa and Mrs. Claus 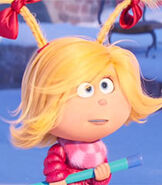 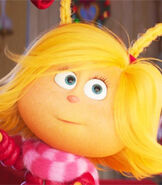 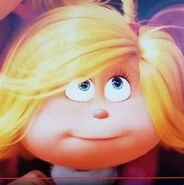 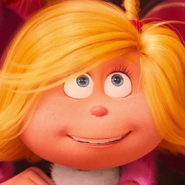 Add a photo to this gallery
Retrieved from "https://parody.fandom.com/wiki/Cindy_Lou_Who?oldid=2472075"
Community content is available under CC-BY-SA unless otherwise noted.