The Parody Wiki
Register
Don't have an account?
Sign In
Advertisement
in: Males, Male Characters, Characters,
and 29 more

Classified is a wolf from Penguins of Madagascar. He's the leader of the undercover force, the North Wind.

He is a Rebel Agent

He is a superhero and a Master Builder. In the latter parody, he becomes the husband of Princess Luna (My Little Pony: Friendship is Magic).

He is a professor, the uncle of Sean Anderson, and ultimately the fiancé of Hannah.

He played Pa Grape in FunnyTales, FunnyTales in the Wild, and Balto: A Funnytales Movie

He is a elderly, amiable (and sometimes pirate) grape.

He is a lavash and the "frenemy" of Sammy Bagel, Jr.

He played Thunderbolt in Fourscore: Polar's Wild Adventure (Awesome Me 2)

He is a hero dog.

He played Sergeant in The Big Friendly Kangaroo

He Plays Bulldog in Friends (Planes)

He is a British Plane

He played as The Cat in Taya (Coraline)

He is a mysterious black cat

He is a police car

He played as Captain Raymus Antillies in Animation Star Wars

his voice by Benedict Cumberbatch, Classified played The Grinch in How The Wolf Stole Christmas; 2018 (KingBalto)

He is a green creature who hates Christmas.

He appeared in The Wolf Who Saved The Little Girl

Classified was hanging out at Dave's Submarine with Lola Sonnor when he notices that Dave/Dr. Octavius Brine has kidnapped "Belle", After Classified saves "Belle" he was beginning to reunite with her, but instead it was her daughter Taya Calder

Classified played George (Pa Grape) in Threefold: The Heroes Who Don't Do Anything,

He is an animatronic bear

He is a Merman and the King of Atlantic Ocean

He's a god of thunder

Classifed played Cassim in Greyladdin 3: The King of Thieves

He is a same wolf 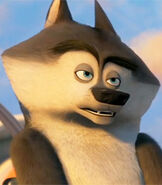 Classified in Penguins of Madagascar 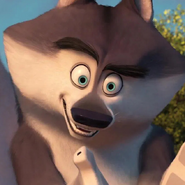 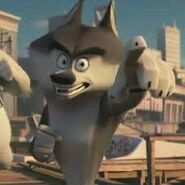 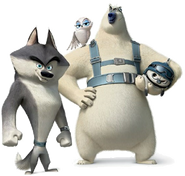 In swimsuit for the summer