Cleo is a purple poodle with pink bow and black collar, the friend of Clifford & T-Bone & She is Einstein's Girlfriend

She is a white retriever puppy.

She played Wheezie in Dog Tales

She is a two headed dragon.

She Played Chibiusa In Sailor Roxanne

She Serena and darien's Daughter of the Future

She Played Numbah 5 In Codename: Dogs Next Door

Role in down By the river animated series

EvilHeart!  She Become The Leader of Jam Team When She Didn't Beat Daisy and The Ice Team She got defeat Robot Human defeated 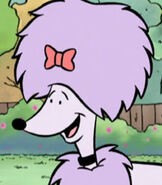 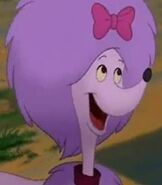 Cleo's New Foot
Add a photo to this gallery
Retrieved from "https://parody.fandom.com/wiki/Cleo_(Clifford_the_Big_Red_Dog)?oldid=2481914"
Community content is available under CC-BY-SA unless otherwise noted.