The Parody Wiki
Register
Don't have an account?
Sign In
Advertisement
in: TRON-Universe, Main Characters, Characters,
and 96 more

CLU 2 (shortened to Clu or CLU which stands for Codified Likeness Utility 2.0) is an artificial intelligence program that was written, & developed in 1983 by Kevin Flynn. Clu is the main antagonist of TRON: Legacy, the secondary antagonist of TRON: Evolution and the overarching antagonist of TRON: Uprising. As with most programs, Clu appears visually identical - albeit at a younger age - to his creator. He represents an evil digital clone of Kevin Flynn and a twisted embodiment of Flynn's youth. He is addressed as "Your Excellency" by various characters.

Clu is based on an earlier hacker program Flynn wrote, which was derezzed by the MCP one year prior. Clu was recompiled for the purpose of creating what Flynn called "the perfect system," taking his user's burden of running the Grid as his own. This he did very well, until the self-generated ISOs began to enter the system. Clu found himself immediately at odds with them because of their lack of a precise function, ultimately deeming them a threat to the system's stability that was to be destroyed. Clu's strict adherence to his directive also caused him to become increasingly frustrated with Flynn for spending so much time away from the Grid, leaving him without a guide to follow and unable to take action without Flynn's approval. Eventually he conspired to take control of the Grid, reasoning that he was made in Flynn's likeness and thus, for all intents and purposes, he was the Creator.

Defined by his duty, Clu was a perfectionist who sought to halt any deviation in the system. Since the ISOs were not created by Flynn, he blamed them for the various glitches in the system, even going so far as to suggest that the ISOs themselves were responsible for such things as Gridbugs. Furthermore, Clu misinterpreted Flynn's comment that "the ISOs are changing the system to fit them", taking it to mean that they are damaging the system's code.

Clu's growing uncertainty towards the ISOs, coupled with his anger towards Flynn's constant absences, led him to berate Flynn for supposedly setting him up to fail in his task. To further discredit the ISOs, Clu created the Abraxas virus out of Jalen, one of the ISO leaders. Jalen was reported by Clu to have been derezzed. Abraxas's new programming, set up by Clu, was to eliminate the ISO faction. But there was one more purpose for Abraxas. Clu pointed out that he was once an ISO, and then accused the ISOs of being unpredictable, dangerous and flaws to the system. After Abraxas's attack on the ceremony of peace between ISOs and Basics, Kevin and Tron met up with Clu and Anon, who had apparently saved Clu when the virus attempted to derezz him. When Clu's last attempt to show Kevin the imperfections of ISOs had failed, he decided to kill the user. Flynn was, in Clu's eyes, blocking his path to fulfilling his directive of a perfect system.

Clu brought four of his Black Guard to ambush Tron and Flynn as the latter sought to leave the Grid. As Tron fought his guards, Clu dealt with Flynn, claiming that the user was 'corrupted'. His attempt to kill Kevin failed, however, when Tron attacked him. By the time Clu had defeated Tron, Kevin had already fled the scene. With Flynn nowhere to be found, Clu focused his efforts on destroying the ISOs, an act of genocide that came to be known as the Purge. Only one ISO, Quorra, was able to survive Clu's purge thanks to the sacrifice of Anon. With the imperfections "gone", Clu believed he had created the perfect system.

Clu proceeded to send out his generals and armies to capture every city on the Grid, believing that, with Tron derezzed, no one could oppose him. Following the capture of Argon City, General Tesler had a large statue of Clu himself placed in the middle of the populated area. However, it wasn't long before a renegade program blew the statue up. The guards suspected that the program was Tron since the circuitry was a match. This baffled Tesler when the report was made. Just then, Clu arrived on the scene, confidently stating, "Tron's dead, Tesler. I killed him myself." However, contrary to Clu's statement, Tron had in fact survived their battle and was actually living in seclusion.

It is later revealed that Clu had ambushed Tron and Flynn with the sole intention of derezzing only Tron. Clu wanted Tron out of the picture so that there would be no one to oppose his rise to rule. With the help of Dyson, who betrayed Tron, Clu was able to subdue the System Monitor and begin his annihilation of the ISOs.

When news of the same renegade program began to spread, Clu sent Dyson to Argon City to neutralize the supposed threat. Dyson later returned to Clu with a message, "Tron lives", claiming that he saw Tron with his own eyes. Making an amused remark about this revelation, Clu ordered Dyson to ensure that no one knew of Tron's true status.

Clu commissioned the use of an enormous recognizer as a mobile re-purposing facility, and sent a repurposed Cutler to bring Tron to it. With the plan having failed, he and Dyson later led an armada of vessels to Argon City.

By the year 2010, Clu had taken complete control of the Grid, fashioning the digital frontier into his own interpretation of perfection. However, he felt trapped inside the electronic reality, and desired to break out into the physical world so he could perfect it as well. For that, he needed to acquire Flynn's identity disc, and have someone open the portal from the outside.

Clu sent a message to Alan Bradley, attempting to lure a new user into the Grid. While the arrival of Sam Flynn was unexpected, it proved more fortuitous, allowing Clu to exploit Kevin Flynn's love for his son more effectively than the friendship towards Bradley might have been. When Sam was caught attempting to escape the Disc Wars arena, he was brought before Clu, whom Sam at first assumed was his father. The program interrogated the user, examined his identity disc, then revealed his true identity before dismissing him.

In order to draw Kevin Flynn's attention, Clu had Sam placed in the Light Cycle Grid, pitted against four sentries and Clu himself. After a brutal battle which derezzed all of Sam's team, Clu was set to deliver the final blow when Flynn's confidante Quorra broke into the Light Cycle Grid in the Light Runner and rescued Sam instead. Clu returned to his Command Ship to await Sam's, or Kevin's, next move.

Some time later, Jarvis reported that the location of Flynn's Safehouse had been traced from Kevin's light cycle found abandoned in the city. Clu investigated the safehouse personally, but found the area deserted and returned to the city in pursuit of the Flynns. After a tip-off was received, Clu's forces were sent to capture them at the End of Line Club. The assault failed to catch the users, although it did prove successful in causing Kevin's identity disc to fall into the hands of Castor, the club's enigmatic proprietor. Clu claimed the disc, and with his prize in hand, set off to the portal to complete his plan.

While Clu addressed his assembled forces and told of his plan to invade the physical world outside the system, the heroes infiltrated his Command Ship and retrieved Kevin's disc. When they escaped in a Light Jet, Clu, with Rinzler and four Black Guards, set off after them in small personal light jets of their own. The smaller craft were whittled away by the superior firepower of the escapees' larger light jet, however their strength in numbers eventually wore it down. Clu would have emerged victorious had it not been for a sudden betrayal by Rinzler. He was unsuccessful at shooting them down, but ultimately reached the portal first after stealing Rinzler's spare light jet baton and leaving Rinzler to plummet into the Sea of Simulation.

Confronting the trio when they arrived, Clu justified his actions by saying that he had done simply as Kevin programmed him to do, venting his frustration at being abandoned and forced to run the Grid on his own. Flynn accepted Clu's arguments, but explained that the perfect world does not exist. Furious with this revelation, Clu attacked Kevin as Sam and Quorra headed for the portal. When Clu attempted to follow them, Flynn prevented his escape and reintegrated the program into himself. Clu was derezzed as the pair reintegrated.

Clu, like all programs, is an exact copy of his user and appears to never age. Although his subordinates and guards have red circuitry, Clu's is a bright yellow.

Clu has demonstrated having inhuman physical, and dexterity abilities, such as enhanced, & A1 strength, as shown when he sent Kevin Flynn flying backwards with his attacks, threw Sam Flynn several yards and jumped even further. In addition, he single-handedly succeeded where four of his elite Black Guard failed; defeating Tron, the Grid's primary system monitor, in combat.

However, the canonocity of this observation is debatable. 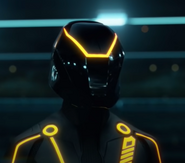