The Parody Wiki
Register
Don't have an account?
Sign In
Advertisement
in: Characters, Creatures, Mythical Creatures,
and 76 more

The cockatrice is a mythical beast, essentially a two-legged dragon wyvern or serpent-like creature with a cock's head. Described by Laurence Breiner as "an ornament in the drama and poetry of the Elizabethans", it was featured prominently in English thought and myth for centuries. It has the reputed ability to kill people by either looking at them—"the death-darting eye of Cockatrice"—touching them, or sometimes breathing on them. It was repeated in the late-medieval bestiaries that the weasel is the only animal that is immune to the glance of a cockatrice. It was also thought that a cockatrice would die instantly upon hearing a rooster crow, and according to legend, having a cockatrice look at itself in a mirror is one of the few sure-fire ways to kill it. The cockatrice was also said to fly using the set of wings affixed to its back. 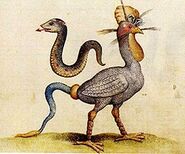 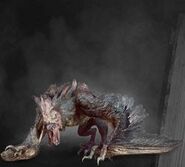