The Parody Wiki
Register
Don't have an account?
Sign In
Advertisement
in: Characters, Animals, Ocean Animals,
and 27 more

The coconut crab (Birgus latro) is a type of land hermit crab with a spectacular appearance and intriguing biology. Able to grow to relatively gigantic proportions, the coconut crab is probably the largest terrestrial arthropod in the world. Indeed, Charles Darwin described the coconut crab as “monstruous” when he encountered it on the Keeling Islands during the voyage of the Beagle. Unlike most other hermit crabs, only the very small coconut crab juveniles find and use gastropod shells to protect their soft-skinned abdomen as they develop. Larger juveniles abandon the shell-carrying habit and instead their abdomen develops a hard skin, the exoskeleton, as over the rest of the body. This protects the crab, reduces water loss and does not restrict its growth, allowing it to reach up to a metre in size toe-to-toe. This huge crustacean is well adapted to life on land with long strong legs. It also has large muscular claws which are used for husking coconuts and opening the shell to eat the flesh. This is a unique behaviour amongst crabs and explains why this species is called the coconut crab. The claws are in fact so powerful they can lift objects such as vegetation or rocks weighing up to 28 kilograms. Its stalked eyes are red and this crab’s body colour varies between islands from purplish-blue to orange-red. Studies show that male coconut crabs are considerably larger than females. The coconut crab’s claws are powerful enough to crack open coconuts, and can be used to lift weights of up to 28 kg. If coconuts are not readily available on the ground, the coconut crab can climb trees and cut them down. Although the adult coconut crab lives on land and can drown in water, its larvae develop in the sea for the first month or so of their lives. 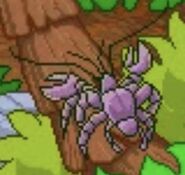 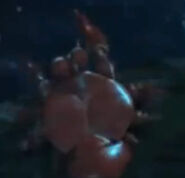 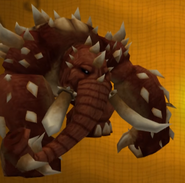