The collared peccary (Pecari tajacu) is a species of mammal in the family Tayassuidae found in North, Central, and South America. They are commonly referred to as javelina, saíno, or báquiro, although these terms are also used to describe other species in the family. The species is also known as the musk hog. In Trinidad, it is colloquially known as quenk. Although somewhat related to the pigs and frequently referred to as one, this species and the other peccaries are no longer classified in the pig family, Suidae. It is sometimes placed in its own genus, Dicolytes. 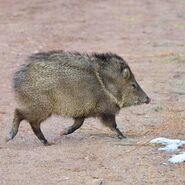 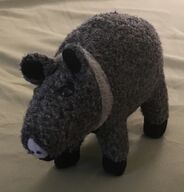 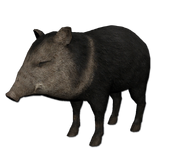 Retrieved from "https://parody.fandom.com/wiki/Collared_Peccary?oldid=2347835"
Community content is available under CC-BY-SA unless otherwise noted.