As Lupe Wolf in Balto The Wolf-Dog

She is a hot she-wolf

As Adult Vitani in The Wolf-Dog King II: Balto's Pack

As Adult Kiara in The Dog King 2: Ace's Pride and The Superdog King II" Krypto's Pride

As Jane Foster in Hunter

She is a female scientist

As Miss Kitty in The Great Wolf Detective

As Georgette in Squeaky & Company

She is a spoiled poodle

As Anastasia's Mother in Brainystasia

She is a Russian royal

As The Queen Ant in A Super Animal's Life

She is an insect queen

As Belle in Beauty and the Wolf (PrinceBalto Style)

She is the assistant of Blitz Stark 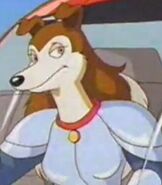 Colleen the Mer-Collie
Add a photo to this gallery

Retrieved from "https://parody.fandom.com/wiki/Colleen?oldid=2556019"
Community content is available under CC-BY-SA unless otherwise noted.