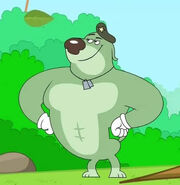 Colonel Doggert is a character from Rat-a-tat.

Colonel Doggert met Doggy Don when he was in school. He helped Doggy Don stand up to Ballu and the other mean dogs. He still dislikes anyone taking advantage of his friends. Later, Colonel found out that he was the adopted brother of Doggy Don, and he now tries harder to help him.

Retrieved from "https://parody.fandom.com/wiki/Colonel?oldid=1905530"
Community content is available under CC-BY-SA unless otherwise noted.