The Commander is the head of Global Security whose main duty is to monitor the Earth for any signs of danger. He works closely with Agent Honeydew, Monkey, and The Justice Friends. He is only ever shown from the waist up in a TV monitor and it is hinted that he is actually trapped in the monitor. He is voiced by Robert Ridgely in 1996 and by Earl Boen in later appearances. 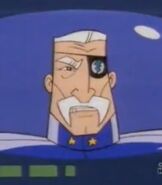 Add a photo to this gallery
Retrieved from "https://parody.fandom.com/wiki/Commander?oldid=1331830"
Community content is available under CC-BY-SA unless otherwise noted.