The Parody Wiki
Register
Don't have an account?
Sign In
Advertisement
in: Characters, Animals, European Animals,
and 29 more

A well-known harbinger of spring, the arrival of the cuckoo (Cuculus canorus) in Britain is eagerly awaited each April. Adult males have bluish-grey upperparts and a white belly with dark barring. Females occur in two forms, one is similar to the male but the breast is buff coloured with dark barring; the other form is reddish brown, and often wholly covered with dark bars. Juveniles are slate-grey with touches of reddish-brown. The familiar call 'cuck-oo, cuck-oo' is imitated by the common name; later in the year females produce a 'bubbling' call. The cuckoo is a brood parasite, laying its eggs in the nest of other species and will provide no parental care of its young. Cuckoo eggs mimic those of their most common hosts. If the hosts notice the extra egg they will abandon the nest. The newly hatched cuckoo chick immediately ejects other eggs and chicks from the nest of its host. A cuckoo chick will often grow to be much larger than its unsuspecting foster parent. 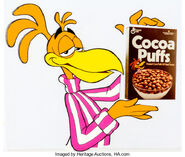