Start a Wiki
Cuttlefish (Sepia officinalis) swim using the fin that passes around the body. They can also rapidly expel water and move quickly by 'jet-propulsion'. Like all cephalopods, the common cuttlefish is an active predator, feeding on molluscs, young fish, and crabs. Other species of cuttlefish may also be taken, and cannibalism has been reported When threatened, this species releases ink (known as sepia) into the water to produce a protective 'cloud' which confuses predators and allows the cuttlefish to escape. During spring and summer, males and females migrate to warmer water in order to spawn. Males often engage in spectacular displays to attract a female, in which bands of colour pass rapidly along the body; fighting over females is common. The eggs are attached to objects on the sea floor such as shells and seaweeds; after spawning, both the males and females die. Young cuttlefish reach maturity at 14 to 18 months of age, and the average life span is 1 to 2 years. 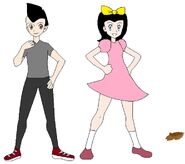 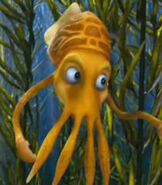 Add a photo to this gallery
Retrieved from "https://parody.fandom.com/wiki/Common_Cuttlefish?oldid=2163646"
Community content is available under CC-BY-SA unless otherwise noted.