The Parody Wiki
Register
Don't have an account?
Sign In
Advertisement
in: Characters, Animals, African Animals,
and 18 more

The common genet (Genetta genetta), or small-spotted genet, is a slender, cat-like carnivore, recognised by a crest of long, black hairs that runs from the shoulders, along the back to the base of the tail, which can be erected when threatened. The rest of the fur on its elongated body is pale yellowish-brown with about three to four rows of dark spots running horizontally across the body, while the long, often white-tipped tail is patterned with between 8 and 13 black rings. The common genet has a rather large head, rounded ears, brown eyes, and whitish patches beneath the eyes and near the tip of the pointed muzzle. Like a cat, the common genet has retractable claws, enabling it to climb trees with agility. The male common genet tends to be larger than the female. 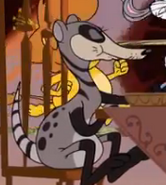 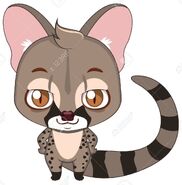