The Parody Wiki
Register
Don't have an account?
Sign In
Advertisement
in: Characters, Animals, African Animals,
and 25 more

The common impala (Aepyceros melampus melampus) is a noisy antelope renowned for its agile leaps. It has reddish-brown upperparts becoming paler on the sides. The underparts, belly, throat and chin are white, as is the tail, which has a thin, black line down its centre. A black line also extends down each buttock. At the back of the hind leg, just above the hoof, is a characteristic tuft of black hair, which covers the fetlock gland. A high kick sends out a puff of scent from the gland, which is thought to be used to lay trails and help regroup herds. Males have lyre-shaped horns, up to 0.7 meters long and deeply ringed for most of their length . Two subspecies of the impala are recognised, based on morphological and genetic differences. At certain times of the year, guttural roars followed by a series of snorts can be heard as the males advertise their territories. 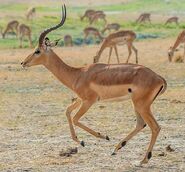 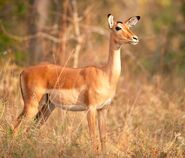 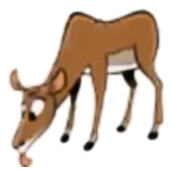 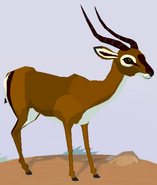 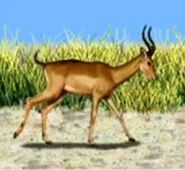