The Parody Wiki
Register
Don't have an account?
Sign In
Advertisement
in: Characters, Animals, North American Animals,
and 40 more

The common loon or great northern diver (Gavia immer) is a large member of the loon, or diver, family of birds. Breeding adults have a plumage that includes a broad black head and neck with a greenish, purplish, or bluish sheen, blackish or blackish-grey upperparts, and pure white underparts except some black on the undertail coverts and vent. Non-breeding adults are brownish with a dark neck and head marked with dark grey-brown. Their upperparts are dark brownish-grey with an unclear pattern of squares on the shoulders, and the underparts, lower face, chin, and throat are whitish. The sexes look alike, though males are significantly heavier than females. During the breeding season, loons live on lakes and other waterways in Canada; the northern United States (including Alaska); and southern parts of Greenland and Iceland. Small numbers breed on Svalbard and sporadically elsewhere in Arctic Eurasia. Common loons winter on both coasts of the US as far south as Mexico, and on the Atlantic coast of Europe. Common loons eat a variety of animal prey including fish, crustaceans, insect larvae, mollusks, and occasionally aquatic plant life. They swallow most of their prey underwater, where it is caught, but some larger items are first brought to the surface. Loons are monogamous; that is, a single female and male often together defend a territory and may breed together for a decade or more. Both members of a pair build a large nest out of dead marsh grasses and other plants formed into a mound along the vegetated shores of lakes. A single brood is raised each year from a clutch of one or two olive-brown oval eggs with dark brown spots which are incubated for about 28 days by both parents. Fed by both parents, the chicks fledge in 70 to 77 days. The chicks are capable of diving underwater when just a few days old, and they fly to their wintering areas before ice forms in the fall. The common loon is assessed as a species of least concern on the IUCN Red List of Endangered Species. It is one of the species to which the Agreement on the Conservation of African-Eurasian Migratory Waterbirds applies. The United States Forest Service has designated the common loon a species of special status because of threats from habitat loss and toxic metal poisoning in its US range. The common loon is the provincial bird of Ontario, and it appears on Canadian currency, including the one-dollar "loonie" coin and a previous series of $20 bills. In 1961, it was designated the state bird of Minnesota, and appears on the Minnesota State Quarter. 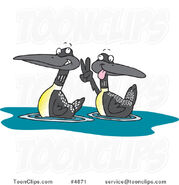 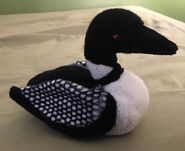