The Parody Wiki
Register
Don't have an account?
Sign In
Advertisement
in: Characters, Animals, South American Animals,
and 35 more

The common marmoset (Callithrix jacchus) has a body length of about 12 - 15 cm, with a tail length of 29.5 - 35 cm. Distinguishing characteristics of common marmosets include white ear tufts, and a white blaze on the forehead. Their head fur is usually dark brown, while their back fur is a greyish brown color with light transverse striping. They also have very pronounced transverse tail stripes. They originally lived on the Northeastern coast of Brazil, in the states of Piaui, Paraiba, Ceará, Rio Grande do Norte, Pernambuco, Alagoas and Bahia. Through release (both intentional and unintentional) of captive individuals, they have expanded their range since the 1920s to Southeast Brazil (its first sighting in the wild for Rio de Janeiro were in 1929) and became there an invasive species, raising concerns about genetic pollution of similar species, such as the buffy-tufted marmoset (Callithrix aurita), and predation upon bird nestlings and eggs. 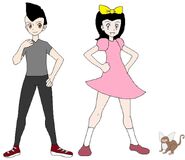