The Parody Wiki
Register
Don't have an account?
Sign In
Advertisement
in: Animals, Amphibians, Salamanders and Newts,
and 15 more

The common mudpuppy (Necturus maculosus) is a species of salamander in the genus Necturus. They live an entirely aquatic lifestyle in the eastern part of North America in lakes, rivers, and ponds. They go through paedomorphosis and retain their external gills, thus resembling axolotls. Because skin and lung respiration alone is not sufficient for gas exchange, mudpuppies must rely on external gills as their primary means of gas exchange. They are usually a rusty brown color and can grow to an average length of 33 cm (13 in). Mudpuppies are nocturnal creatures, and only come out during the day if the water in which they live is murky. Their diets consist of almost anything they can get in their mouths, including insects, earthworms, mollusks, and annelids. Once a female mudpuppy reaches sexual maturity, at six years of age, she can lay an average of 60 eggs. In the wild, the average lifespan of a mudpuppy is 11 years. Because of their prevalence and larger size than other salamanders, mudpuppies are good organisms for dissections. 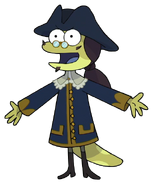