The Parody Wiki
Register
Don't have an account?
Sign In
Advertisement
in: Villains, Green Characters, Twins,
and 36 more

Constantine is the evil frog from Muppets Most Wanted.

Constantine is the main antagonist of the film. He plans to steal the Crown Jewels of England with help from his #2, Dominic Badguy.

In the film, Constantine is trapped in a prison cell in Russia. However, he is somehow able to break free with pre-planned explosives and uses his martial arts to his expertise to escape. Then, as a wandering, shadowy figure, he puts a fake mole on Kermit the Frog's cheek by slapping it on the exact spot his would be, framing Kermit and putting him behind bars.

Constantine on the other hand brought green makeup to cover up his mole so no one would suspect him, and make the Muppets (except Animal) believe he is Kermit.

He played Scar in The Muppet King

He played Caterpillar in Jasmine In Fantasyland

He played Smitty the Bully in Lumpy a.k.a Dumbo

He played Abis Mal in Mickeyladdin 2: The Return of Peteafar

He played Bruiser in Orinoco Jones

He played Mr. Tinkles in Muppets and Animals (Cats and Dogs)

He played Agent James Suggs in Orinoco and the Wombles 4: The Road Womble

He played Gallaxhar in Animals vs Muppets

He is a evil smilodon

In Cats Most Wanted, he is played by Macavity 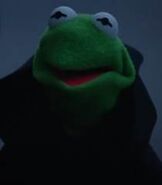 Constantine in Muppets Most Wanted