The average length of adult copperheads (Agkistrodon contortrix) is 30 inches (76 cm). They have an unmarked copper-colored head, and reddish-brown, coppery bodies with chestnut brown crossbands that constrict towards the midline. Copperheads are thick-bodied and have keeled scales. There is a temperature-sensitive pit organ on each side of the head between the eye and the nostril. Young copperheads are seven to ten inches (18 to 25 cm) long and grayer in color than adults. They have a sulfur-yellow-tipped tail, but this color fades with age and is lost by age three or four. Copperheads are sexually dimorphic in size. Males have longer tails than females and females grow to greater lengths. Copperheads are social snakes. They may hibernate in a communal den with other copperheads or other species of snakes including timber rattlesnakes and black rat snakes. They tend to return to the same den year after year. Copperheads can be found close to one another near denning, sunning, courting, mating, eating, and drinking sites. They are believed to migrate late in the spring to reach summer feeding territories and reverse this migration in early autumn. Males are aggressive during the spring and autumn mating seasons. They try to overpower each other and even pin the other's body to the ground. This behavior is exhibited most often in front of females but this is not always the case. These interactions may include elevating their bodies, swaying side to side, hooking necks, and eventually intertwining their entire body lengths. Copperheads have been reported to climb into low bushes or trees after prey or to bask in the sun. They have also been seen voluntarily entering water and swimming on numerous occasions. 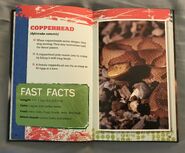