The Parody Wiki
Register
Don't have an account?
Sign In
Advertisement
in: Characters, Animals, African Animals,
and 28 more

Coquerel’s sifaka (Propithecus coquereli) is a strikingly beautiful and highly threatened lemur. Once considered a subspecies of Verreaux’s sifaka (Propithecus verreauxi), Coquerel’s sifaka can be distinguished from other sifakas in its range by the deep chocolate brown shade of the fur on its thighs, arms and often across the chest. The rest of its soft, dense fur is predominantly white, while the bare face, ears, and palms of its hands and feet are jet black. The bright yellow eyes peer out vividly against its dark face. Like all sifakas, which are named for the sound of the shi-fahk call they make, this species has short arms, rather limited in their movement, but large, strong hindlimbs, which propel the sifaka as it leaps between trees 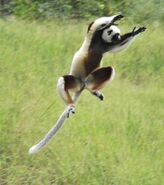 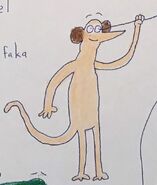 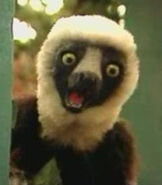 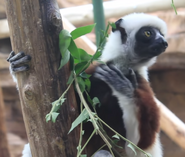 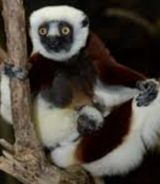