Start a Wiki
A bite from the notoriously venomous coral snake (Micrurus fulvius) at first seems anticlimactic. There is little or no pain or swelling at the site of the bite, and other symptoms can be delayed for 12 hours. However, if untreated by antivenin, the neurotoxin begins to disrupt the connections between the brain and the muscles, causing slurred speech, double vision, and muscular paralysis, eventually ending in respiratory or cardiac failure. This iconic snake, with its bulbous head and red, yellow, and black bands, is famous as much for its potent venom as for the many rhymes—"Red and yellow, kill a fellow; red and black, friend of Jack"—penned to distinguish it from similarly patterned, nonvenomous copycats, such as the scarlet king snake. Coral snakes are extremely reclusive and generally bite humans only when handled or stepped on. They must literally chew on their victim to inject their venom fully, so most bites to humans don't result in death. In fact, no deaths from coral snake bites have been reported in the U.S. since an antivenin was released in 1967. Coral snakes are relatives of the cobra, mamba, and sea snake. They live in the wooded, sandy, and marshy areas of the southeastern United States, and spend most of their lives burrowed underground or in leaf piles. They eat lizards, frogs, and smaller snakes, including other coral snakes. Baby snakes emerge from their eggs 7 inches (17.8 centimeters) long and fully venomous. Adults reach about 2 feet (0.6 meters) in length. Average lifespan in the wild is unknown, but they can live up to seven years in captivity. 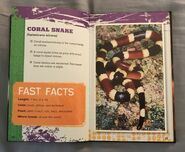 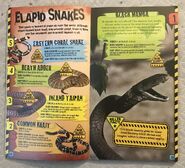 Add a photo to this gallery
Retrieved from "https://parody.fandom.com/wiki/Coral_Snake?oldid=2182185"
Community content is available under CC-BY-SA unless otherwise noted.