Compared to her older self, Courtney is much kinder as a child, even though her business, obsessive streak and refusal to apologize and accepts her stand are still present. Being a teacher's pet, she tries to keep a good reputation in class in order to set up for her future. Courtney, like her older self, shows intelligence beyond her age and tends to explain in rather long expressions that the others have difficulty in understanding. Courtney is shown to be so used to correcting people that she finds it extremely difficult nice. Courtney's Loves To Dance Like a Ballerina 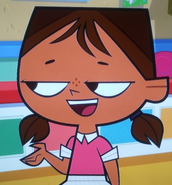