The Parody Wiki
Register
Don't have an account?
Sign In
Advertisement
in: Characters, Animals, Antarctic Animals,
and 25 more

With an estimated population of around 15 million individuals, the crabeater seal (Lobodon carcinophaga) is by far the most numerous pinniped and is possibly the most abundant large mammal in the world. Somewhat misleadingly, the crabeater seal does not actually eat crabs, instead feeding almost exclusively on Antarctic krill (Euphausia superba). The crabeater seal has a slender, streamlined body, a distinct neck, and a slim face with a relatively pointed snout. In general, the crabeater seal is brown or silvery-grey on the upperparts of the body, becoming lighter brown to almost blonde on the underside. The flippers are mainly brown, sometimes marked with spots, and are usually the darkest areas of the body. Chocolate-brown patterns or dark flecks and spots also mark the shoulders, sides, flanks. The colouration of the crabeater seal varies depending on the time of year, being darkest after the summermoult in January and February. The colour of the coat fades and becomes progressively paler throughout the year, changing to almost blonde, golden or creamy-white by the following summer. Newborn crabeater seal pups have dark flippers and a pale coffee-coloured, white or grey-brown coat which is soft and woolly. The belly and the muzzle may have a yellowish tinge. As juveniles, crabeater seals experience astonishingly high mortality rates of up to 80 percent, usually as a result of frequent attacks by leopard seals (Hydrurga leptonyx). Of the seals that survive their first year, nearly all individuals end up with pairs of long, parallel scars on their bodies inflicted by leopard seals. Adult crabeater seals also typically have small scars around their front and rear flippers as result of aggressive displays and fighting. Often, female seals will have scars on their backs caused by male seals during mating, while males usually have a series of scars on their lower jaw and throat due to fights with other males during the breeding season. 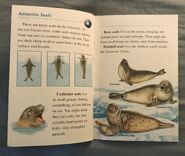