Crank((e)y) Casey is a supporting character in Robots. He is voiced by Drew Carey.

Crank is a rusty orange robot with grayish eyes. He has a large head with a wire coming out the top, and a small, hunched body with long arms. His bottom half is a large, round vehicle with three wheels and a single headlight. During the final fight, he is "upgraded" to look like a monster truck, with headlights on his forehead and trading his three small wheels for larger ones.

Staying true to his name, Crank is pessimistic and sarcastic. He always looks at the negative aspect of things and expects the worst to happen. He frequently complains and is quick to give in when the going gets tough. His motto is "Never try, never fail". Crank lives with Aunt Fanny, Fender, Piper, Lug, and Diesel at the boarding house, where he sits around and complains all day.

Surprisingly, when Rodney  tries to rally his friends to fight back against Ratchet, Crank is the first one to join him. Temporarily abandoning his pessimism, he states that he is tired of sitting around and doing nothing, and that he wants to try for once in his life. He is later seen dancing with Rodney's other friends during the victory celebration in Rivet Town.

"Never try, never fail."- To Rodney, when he complains of an angry mob.

"You'll never get past the gate..."- To Rodney and Fender, when they declare to go to the Bigweld Ball.

"Someone get a crane."- When Aunt Fanny falls over.

"Well, there goes OUR happy ending."- Referring to the fact Herb sounds "rusty."

"Oh, man, this is my third oil change today, something's wrong with me."- Crank in his room leaking oil. 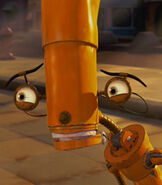 An upgraded Crank, ready for battle with the other rusties
CrankCasey002.png

Add a photo to this gallery
Retrieved from "https://parody.fandom.com/wiki/Crank_Casey?oldid=2091916"
Community content is available under CC-BY-SA unless otherwise noted.