The crowned lemur (Eulemur coronatus) is a lemur that is 31–36 cm (12–14 in) long and weighs 2 kg (4.4 lb). Its tail is about 42–51 cm (17–20 in) long. The crowned lemur is endemic to the dry deciduous forests of the northern tip of Madagascar. It eats a diet of mostly flowers, fruits, and leaves. The population is estimated to 1000–10,000 individuals as of 2004, most of which live within the Ankarana Plateau although there is also a population on the Montagne d'Ambre. This species has a distinctive brown-orange crown on the top of the head. Females have a gray body with an orange crown, and males are a darker reddish brown, crowned with black and orange. Crowned lemurs have a life span of approximately 20 years and reach sexual maturity after 20 months. They give birth usually in late September or early October, after a gestation period of 125 days. The crowned lemur is in the order of Primates as it possesses characteristics such as pseudo-opposable thumbs, binocular vision and is highly intelligent. E. coronatus shares with others of the family Lemuridae long and slender limbs, a slightly longer nose, a smaller brain and a 'grooming comb' formed by the incisors and canine teeth. The crowned lemur possesses a long non-prehensile tail used for balance when jumping from branch to branch and for communication within the closely knit, female-led social group. This member of the Eulemur genus is primarily diurnal but has periods of feeding activity at night too. 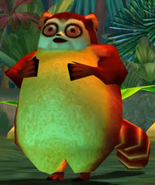