The Parody Wiki
Register
Don't have an account?
Sign In
Advertisement
in: Characters, Animals, Extinct Animals,
and 17 more

Cryolophosaurus is a genus of large theropods known from only a singlespecies Cryolophosaurus ellioti, known from the early Jurassic period of Antarctica. It was about 6.5 metres (21.3 ft) long and 465 kilograms (1,025 lb) in weight, making it one of the largest theropods of its time. Individuals of this species may have grown even larger, because the only known specimen probably represents a sub-adult. Cryolophosaurus is known from a skull, a femur and other material, the skull and femur of which have caused its classification to vary greatly. The femur possesses many primitive characteristics that have classified Cryolophosaurus as a dilophosaurid or a neotheropod outside of Dilophosauridae and Averostra, where as the skull has many advanced features, leading the genus to be considered a tetanuran, an abelisaurid, a ceratosaur and even an allosaurid. Since its original description, the consensus is that Cryolophosaurus is either a primitive member of theTetanurae or a close relative of that group. Cryolophosaurus possessed a distinctive crest on its head that spanned the head from side to side, similar to a Spanish comb. Based on evidence from related species and studies of bone texture, it is thought that this bizarre crest was used for intra-species recognition. The brain of Cryolophosaurus was also more primitive than those of other theropods. 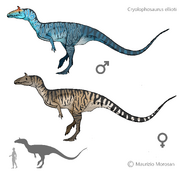