George is an clever, smart, intelligent, curious, innocent, cute, precious, compassionate, adorable, tailless young little monkey who is always up to something due to his curious nature. He is voiced by Frank Welker.

George's human owner is Ted Shackleford (The Man with the Yellow Hat), who tries to pay close attention to George, but mostly always loses concentration. George is generally a curious and adorable little monkey, but sometimes his curiousity gets him in trouble, he is always asking questions to Ted and his other friends.

He played Abu in Maxladdin

He played Dopey in Megara White and The Seven Animals

He played Sebastian in The Little Mother 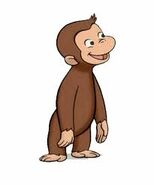