The Parody Wiki
Register
Don't have an account?
Sign In
Advertisement
in: Female, Minor Characters, Objects,
and 8 more

Daisy the Donkey is a recurring fictional character in The Amazing World of Gumball and Anais Watterson's toy donkey. She is a pink and yellow stuffed donkey that was first shown as a character of the Daisy the Donkey Show in "The Responsible." She seems to be a very popular character in the series, seeing as she even has her own cereal and a theme park based on her.

Daisy is a pink donkey with a yellow muzzle, hands, and feet. In Season 1, she has white sparkles in her pupils, though they have been removed and her eye color changed to purple since Season 2.

Daisy gets hugged by Kessie 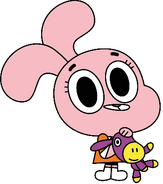 Kessie bucks Manfred away from her and Daisy

No! Don't pull her head!