Dallben is an Character Form The Black Cauldron

He is a Creepie Old Men

He is a Friar

He played Daniel in Taran and Wart

He is a butler

He played Archdeacon in The Total Drama of Notre Dame

He is a Priest

He played Mr. Ages in The Secret of NIMH (Uranimated18 Version)

He played The Sultan in Prince Cornelius (Aladdin) 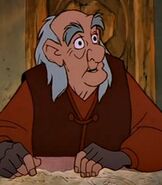 Retrieved from "https://parody.fandom.com/wiki/Dallben?oldid=2078374"
Community content is available under CC-BY-SA unless otherwise noted.