The Parody Wiki
Register
Don't have an account?
Sign In
Advertisement
in: Characters, Animals, African Animals,
and 21 more

The largest of all gazelle species, the dama gazelle (Nanger dama) has at least two subspecies, which vary greatly in colour. The eastern subspecies, known as the red-necked gazelle (Nanger dama ruficollis), is bright white with a reddish-brown neck. However, the degree of colouration increases from east to west, and the most westerly subspecies, the Mhorr gazelle (Nanger dama mhorr), is almost completely red, apart from the undersides and the rump. It has a small white patch on the throat, and a white face, with red cheek patches and thin black stripes running from the eyes to the corners of the mouth. All dama gazelles have thin legs and a long, slender neck, as well as long, S-shaped horns, which are larger and thicker in males. 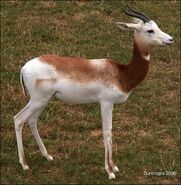 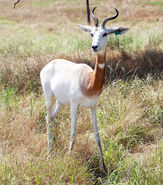 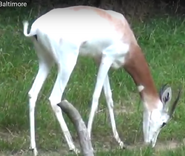 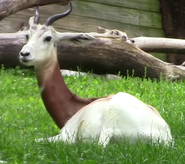 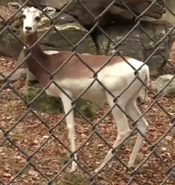