The Parody Wiki
Register
Don't have an account?
Sign In
Advertisement
in: Animals, Anthropomorphic, Female,
and 22 more

Dannan O'Mallard is the granddaughter of Grandma O'Mallard, the cousin of Gaddie, the best friend of Piggley Winks and Ferny Toro and is the tritagonist of Jakers! The Adventures of Piggley Winks. In all her appearances Dannan is seen as an 8-year-old duck living in the village of Tara in Ireland during the 1950s in a small house near a lake with her grandmother (though her mother is mentioned in earlier episodes).

In the episode Dannan's American Cousin she is shown to have a cousin named Gaddie who moved to America at a young age and fully embraced the American lifestyle.

She is voiced by Tara Strong

Dannan has brown feathers and wears a red sweater, a red or green bow and glasses. On the episode "A Touch of Spain", Dannan wore a red dress and pumps to perform a Spanish dance. 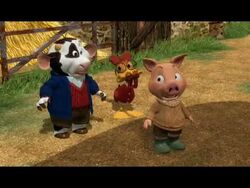 Dannan with Piggley and Ferny 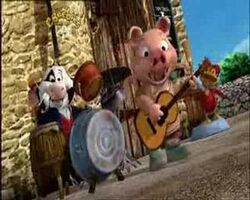 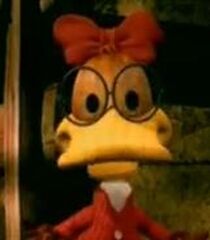