The Parody Wiki
Register
Don't have an account?
Sign In
Advertisement
in: Characters, Heroes, Darkwing Duck Characters,
and 34 more

Drake Mallard is the not-so-mild-mannered alter-ego of St. Canard's resident superhero Darkwing Duck, and the protagonist of Disney's 1991-92 animated television program of the same name. He is also the adoptive father to the orphaned Gosalyn Waddlemeyer. He has been described as a cross between Batman and Donald Duck but his costume and gas gun seems to be a reference to pulp fiction character the Shadow. He made his debut along with Gosalyn in The Disney Afternoon title sequence in 1990.

He is a flying boy.

He is a good mask. 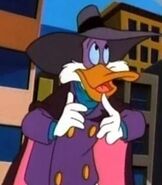 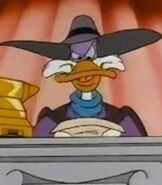