The Parody Wiki
Register
Don't have an account?
Sign In
Advertisement
in: Female Characters, Villains, Antagonists,
and 60 more

Darla Dimple is a villain from Cats Don't Dance.

She is a Evil Fire Nation Princess

She Played as Amy in Total Drama Pahkitew Island

She is a Evil Twin For Samey Sister

She Played Queen Chrysalis in My Little Family: Friendship is Happh The Canerlot Wedding

She is a changling

She is a Greedy Vizier

She is a Brat

She is a Queen

She Played Gingerbread Witch in Annie And Pudge

She is a Witch in the Gingerbread House

She Played Maleficent in Sleeping Fairy

She is a Wicked Fairy

She Played as The Little Girl in Davey's Bad Hair Day

She is the Fifth Defence Against The Dark Arts Teacher, Who is very Abusive and Cruel to her Students.

She will play Rhoda Penmark in The Bad Seed (EJL423 Style)

She is the main protagonist villain

She played as Cozy Glow in My Little Teenage Girls: Friendship Is Magic

She is a pegasus pony

She will play Ms. Fieldmouse in Alice (Thumbelina)

She played Bartholomew in The Great Serena Detective

Later, when they are finishing up a verse of the song, she drunkenly says, "To Ratigan, the world's greatest old hag!", which makes Gothel very mad (as he despises being called an old lag). She throws her outside the hideout and summons Felicia with a bell. However,Darla is too drunk to notice her, and she easily catches and eats him.Darla starts drunkenly singing the praises to Gothel, and is swallowed whole just as she is about to call her vengeful boss an old hag again. After a short period of mourning from the other henchmen, Gothel suggests that they finish the song before she has Felicia eat the rest of them, which they do out of fright. 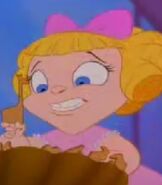 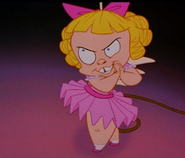 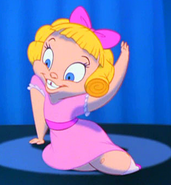 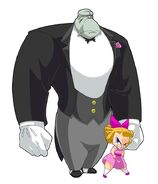 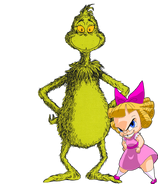