The Parody Wiki
Register
Don't have an account?
Sign In
Advertisement
in: Girls, Females, Main Characters,
and 12 more

Dawn Abigail Harper is one of the Harper quadruplets and one of the protagonists in Nicky, Ricky, Dicky & Dawn. She's the only girl in the quads, leading to circumstances such as fighting with her brothers. She was the first quad born, making her the oldest. She believes she's the leader quad.

Dawn was born four seconds before her brothers. That means she's four seconds older, four seconds wiser, and four seconds smarter… according to her at least. Full of energy and armed with charm, she's a born leader. From sports to school activities, Dawn's the quad who's out to prove she can do it all while still holding them together when things get tough! Dawn may act like the leader of the pack, but deep down, she's just one of the pack. Despite her maturity, there are instances where she is selfish and petty, and takes her frustration out on her brothers like in "I Want Candace" when her brothers accidentally ruined her chance to meet her idol Candace Parker and wanted them to suffer. Another example was in "The Wonderful Wizard of Quads" when her brothers got tricked by Rose Durkin into giving her the silver slippers and blamed them for ruining her chances for becoming Dorothy, despite being aware of Rose's manipulative nature.

Dawn is the daughter of Tom Harper and Anne Harper. She is the oldest of the Harper Quads -- by four seconds. She spends most of her time with her brothers, Ricky, Dicky and Nicky.

Dawn moves out to her own bedroom from the quads bedroom in "Dawn Moves Out." She goes to her first school dance with Mack in "Scaredy Dance." She realizes that she's going through puberty in "Tween Wolf." She gets summer job in "One Quadzy Summer." She gets her ears pierced in "Quadpendence Day."

Dawn graduates from Edgewood School (middle school) in "Cementing the Quads' Legacy" in which she leads her brothers and the rest of the class to pull an epic sayonara stunt. She starts high school in Rothschild Prep but the quads accidentally destroy the school only three months later. She is now a student at Boulder Academy high school.

One of Dawn's biggest challenges is trying to find independence and privacy from her brothers. She used to share bedroom with her brothers until the episode "Dawn Moves Out" when she realized that she's growing up and her body will soon be going through changes. She got her own room and it took time to adjust to being alone. When she got scared at night, she would hold a sleepover with the boys.

She put a "No Boys Allowed" sign on the door but the boys don't respect her privacy as seen the episode "Diary of an Angry Quad" when the boys keep getting in to read her diary. She eventually got them back by writing fake diary entries to make the boys insecure. But it ended up backfiring for everyone.

In "I Want Candace," her brothers were listening in on her when she was on the phone with a local radio station where she could have won a chance to meet her favorite basket ball player, Candace Parker. The boys ended up cutting the phone cord and causing her to lose the chance to meet Candace. To make it up to her, the boys set up for Dawn to meet Candace separately.

In "Unhappy Campers," Dawn's attempts to not be associated with her brothers backfired when she ended up "dating" each one of them while at camp. Before leaving for camp, she got mad that her brothers messed with her bag, removed her stuff and replaced it with their own stuff. After a huge argument, the quads agreed that when they go to camp, they should act as if they're not related. Each one of them lied that they were an only child and they were assigned to different groups. Dawn's group didn't want to do anything besides talking about boys. So, when Dawn accidentally said that she knew Dicky, the girls pressured into admitting that she was dating him. If she said yes, they would agree to do any camp activity with her. So she faked dating Dicky. Ricky overhead the news and realized that his mates would let him use the telescope if he was dating Dawn too. Nicky, in an attempt to help a camp counsellor with break-up, ended up dating Dawn too. Things got out of control and Dawn finally admitted that her "boyfriends" were her brothers.

Sick of her brothers being with her in everything she does, Dawn tried to do an activity without them in "Ballet and the Beasts." She joined Eiffel's ballet dance class but she was a terrible dancer. Her brothers found a way into the dance class and impressed Eiffel. When Dawn pressured them to leave, Eiffel told Dawn that she can't let her in without the boys.

Dawn and Mae get a summer job at the Boulderly Hills Country Club in "One Quadzy Summer," hoping to stay away from her brothers but they follow her and keep messing with her by making complex orders. She ends up being Madison's personal assistant.

Unlike her brothers, Dawn is actively involved in a lot of school activities including soccer, music and school newspaper. She joined the Edgewood Buffalos Soccer Team in "I Got Your Back." However, the soccer team girls made it difficult for her to fit in the group by requiring her to prove that she's one of them. When she accidentally pied Nicky, the girls loved it and pressured her to do it again so that they can record it. This created tension between her and the quads and they ended up in detention for smashing pie on each others faces/heads/ But, at the end of the day, she confronted the soccer girls and stood by her brothers.

In "Quad-ventures in Babysitting," she tried again to look cool in front of the soccer girls by inviting them to come over for a party when Josie is babysitting - and causing Josie to get in trouble.

In "Do-It-All Dawn," she had trouble keeping up with everything because of her soccer practices as well as music practices happening at the same time. Her family advised her to drop one activity but she claimed that she could do it all. The whole situation ended up running out of control but her brothers stepped in to help.

Dawn is one of the school's newspaper editors along with Mae Valentine. But in "Urban Legend Outfitters," she was willing to compromise her values to increase readership. She ran an article on urban legends such as "Pig Foot" against Mae's wishes. In "The Buffa-Lowdown," she and Mae are temporarily fired from the live news cast by Ricky in his attempt to please Avery.

Dawn is a girl scout as seen in "Ele-Funk in the Room" along with her friends, Mae, Natlee and June.

In "This Little Piggy Went to the Harpers," Dawn gets her soccer teammates to kidnap their rival team, War Pig's mascot.

Dawn joins the Boulder Academy Glee Club in "Nicky, Ricky, Dicky & BeyDawncé" after being helped by her brothers to find confidence in herself and audition. Usually, whenever she tries to audition, she becomes nervous and just yodels instead.

Dawn and Mack are friends, and they both seem to have crushes on each other, particularly Dawn. They never really became a couple, and since the episode, Scaredy Dance, Dawn has had another crushe on Joey Montagelli. As of Season 4, Mack has not appeared yet, and they’re just crushes.

Mae is Dawn's best friends. If Dawn is not with the rest of the quad, she is usually with Mae. They often have sleepovers at Dawn's room. They share a lot of secrets. This helped push Dawn into getting her own room in "Dawn Moves Out." Dawn usually enlists Mae in her schemes against her brothers. Dawn is disgusted by the idea of Mae ever dating any of her brothers. When she accidentally set up all of her brothers with Mae in "Three Men and a Mae B.," she went in great lengths to sabotage any potential relationship.

In "Ele-Funk in the Room," Dawn and Mae had a falling out when Dawn's brothers pushed Mae to confront Dawn for being pushy. Dawn didn't want to accept the criticism and Mae wasn't willing to apologize. The brothers tried to get Dawn and Mae back together but any attempt only made things worse. Dawn forced her brothers into a quad-pact, forbidding any of them from hanging out with Mae or going to the concert with her. Since the boys wanted to go the concert, they broke the quad-pact and lied to Mae that Dawn was ok with it. Dawn broke the quad-pact too to go with June and Natlee only to meet Mae at the concert. After that they apologized to each other and make up.

Mae and Dawn have another falling out in "I Want My Mae B. Back" when Dawn gets jealous that Mae is spending more time with Miles than with her. She enlists her brothers to help keep Mae and Miles apart but it leads to a huge hilarious misunderstanding. At the end Mae promises to spare more time for Dawn while Dawn apologizes for trying to sabotage the relationship. Mae is glad that Dawn only did it so they can spend more time together.

Despite their families being at war, Joey and Dawn did date in the episode, "Not-So-Sweet Charity." 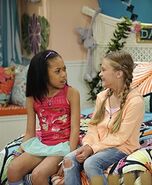