The Parody Wiki
Register
Don't have an account?
Sign In
Advertisement
in: Characters, Animals, Insects,
and 8 more

The name death's-head hawkmoth refers to any one of the three moth species of the genus Acherontia (Acherontia atropos, Acherontia styx and Acherontia lachesis). The former species is found primarily in Europe, the latter two are Asian; most uses of the common name refer to the European species. These moths are easily distinguishable by the vaguely human skull-shaped pattern of markings on the thorax. All three species are fairly similar in size, coloration, and life cycle. 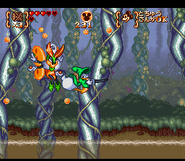