The Parody Wiki
Register
Don't have an account?
Sign In
Advertisement
in: Characters, Animals, African Animals,
and 8 more

The deathstalker (Leiurus quinquestriatus) is a species of scorpion, a member of the family Buthidae. It is also known as the Palestine yellow scorpion, Omdurman scorpion, Naqab desert scorpion and by many other colloquial names, which generally originate from the commercial captive trade of the animal. To eliminate confusion, especially important with potentially dangerous species, the scientific name is normally used to refer to them. The name Leiurus quinquestriatus roughly translates into English as "five-striped smooth-tail". In 2014, the subspecies L. q. hebraeus was separated from it and elevated to its own species Leiurus hebraeus. 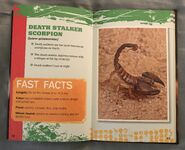