Deinocheirus is a genus of large ornithomimosaur that lived during the Late Cretaceous around 70 million years ago. In 1965, a pair of large arms, shoulder girdles, and a few other bones of a new dinosaur were first discovered in the Nemegt Formation of Mongolia. In 1970, this specimen became the holotype of the only species within the genus, Deinocheirus mirificus; the genus name is Greek for "horrible hand". No further remains were discovered for almost fifty years, and its nature remained a mystery. Two more complete specimens were described in 2014, which shed light on many aspects of the animal. Parts of these new specimens had been looted from Mongolia some years before, but were repatriated in 2014. 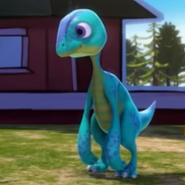