The Parody Wiki
Register
Don't have an account?
Sign In
Advertisement
in: Characters, Animals, Extinct Animals,
and 30 more

Deinosuchus is an extinct genus related to the alligator that lived 80 to 73 million years ago (Ma), during the late Cretaceous period. The name translates as "terrible crocodile" and is derived from the Greek deinos (δεινός), "terrible", and soukhos(σοῦχος), "crocodile". The first remains were discovered in North Carolina (United States) in the 1850s; the genus was named and described in 1909. Additional fragments were discovered in the 1940s and were later incorporated into an influential, though inaccurate, skull reconstruction at the American Museum of Natural History. Knowledge of Deinosuchus remains incomplete, but better cranial material found in recent years has expanded scientific understanding of this massive predator. 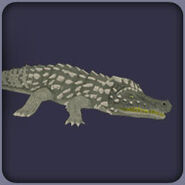 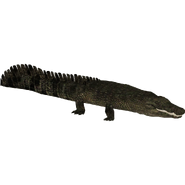