Start a Wiki
Deinotherium was a large prehistoric relative of modern-day elephants that appeared in the Middle Miocene and survived until the Early Pleistocene. During that time it changed very little. In life, it probably resembled modern elephants, except that its trunk was shorter, and it had downward curving tusks attached to the lower jaw. 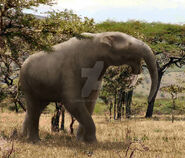 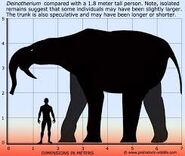 When Whales Walked: Journeys in Deep Time (2019)
Add a photo to this gallery

Add a photo to this gallery
Retrieved from "https://parody.fandom.com/wiki/Deinotherium?oldid=2130081"
Community content is available under CC-BY-SA unless otherwise noted.