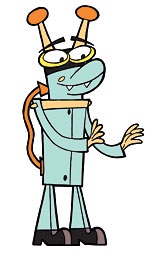 Delete is the skinnier of the two of Hacker's henchman, the other being Buzz. He is loyal to Hacker. Unlike Buzz, who is more rough around the edges, Delete is softer and more vulnerable to trickery and deceit. He cares deeply for three things: Buzz, whom he has a brotherly friendship with, his pet bunny George, and Zanko, his fairy borg father. Though Delete can still make simple mistakes, he becomes slightly more intelligent as the series progresses.

According to the Cyberchase website's newest game Buzz and Delete Save the Day, Buzz and Delete came from a cybersite called Botsopolis, led by a Delete-look-alike named Princess Deia (an obvious reference to Leia from Star Wars). In Hacker's earlier days, he bought robotic parts from that cybersite and constructed Buzz and Delete from them. Based on the dialogue all three characters share, it can be assumed that they both have a good relationship with her. Delete is charismatic, allowing him to trick the Cybersquad into following him at least twice.