Derek Richards was a character played by Rickey Carter who debuted in the Backyard Gang video Waiting for Santa replacing Salim Grant who played Jason. He appeared in the later videos of the series, as well as in the first two seasons of Barney & Friends. 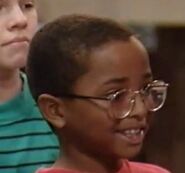 Add a photo to this gallery
Retrieved from "https://parody.fandom.com/wiki/Derek?oldid=2413239"
Community content is available under CC-BY-SA unless otherwise noted.