Start a Wiki
Diamond Tiara is a snobby, conceited school-age Earth pony filly and a minor antagonist who first appears in Call of the Cutie. She and Silver Spoon are classmates of the Cutie Mark Crusaders. She is called Diamond Dazzle Tiara in some merchandise.

She is a Rude, Dumb, Idiotic, Mean and Obnoxious Contestant, who is a Pageant Queen

She is a bully

She is a Lioness Cub 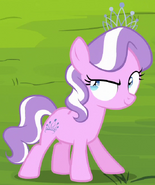 Add a photo to this gallery
Retrieved from "https://parody.fandom.com/wiki/Diamond_Tiara?oldid=1851523"
Community content is available under CC-BY-SA unless otherwise noted.