Professor Dick Hardly (voiced by Jeff Bennett) is one of Professor Utonium's old college roommate, who has leeched off of him instead of studying. It is revealed in flashbacks that Professor Dick is a womanizer. He appears to be around the same age as the Professor. His only appearance is in the episode "Knock It Off" where he is amazed over the girls' powers. He has wanted to make a profit off of them, but finds that the Professor angrily refuses and kicks him out. 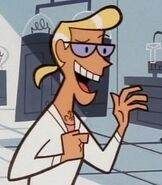 Add a photo to this gallery
Retrieved from "https://parody.fandom.com/wiki/Dick_Hardly?oldid=2123820"
Community content is available under CC-BY-SA unless otherwise noted.