Dijonay Jones is a main character from the Disney Channel cartoon The Proud Family.

she is Penny Proud's sassy, loud-mouthed, and enthusiastic best friend who knows her best. Dijonay is loyal at heart and is often the first to come to Penny's aid and encourages her other friends to do the same. However, her impulses often overtake her better judgement and will cause her to ditch her friends for instant gratification or to escape trouble. She also cannot resist gossip and has gotten Penny and her friends into trouble many times. Eventually, Penny decided she had to stop trusting Dijonay, though the girls still remain friends. Despite this however, Dijonay has shown extreme loyalty to Penny and has had her back plenty of times. In return, Penny continues to show Dijonay unconditional love and one of Dijonay's biggest fears is losing her in any way, shape or form. Dijonay comes from a large family and is the oldest of ten children.

Dijonay Jones is an extremely extroverted, and talkble teenager and wears her attitude on her sleeve. She is loud-mouthed, hyperactive and loves having conversations. Dijonay's love for socialization comes with its flaws however as she is extremely nosy and cannot resist gossip. She also has a big mouth and has sold Penny out many times. Dijonay is also extremely inconsistent and it can be difficult to decipher what her ultimate goal is. She has been disloyal on many occasions to her friends and is quick to abandon them at difficult times. She mainly does this with Penny and often times LaCienega, who are supposed to be her two closest friends. However, Dijonay has also helped Penny in the clutch and saved her from danger and embarrassment in key situations and has played an important role in helping to integrate Penny and LaCienega during the early part of the series where the two clashed heavily. She also literally has no problem sticking up for her friends when she feels they are being treated unfairly. Dijonay is very upbeat, and fun and can bring energy to an otherwise dull social environment which is fitting since she is captain of the Willie T. Ribbs Racer Cheerleaders. 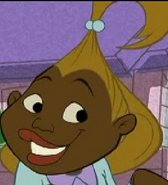