Dilbert is the title character and mouthless man appearing in the comic strip by Scott Adams. He also appears in the television series. He has wavy hair and a head shaped like a chef's hat and wears oval-shaped glasses, a white shirt, a red and black striped tie, black pants, and black shoes. He works in an office. 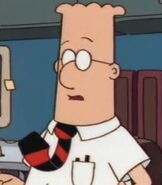 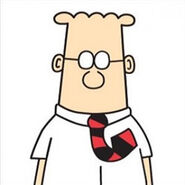 Add a photo to this gallery
Retrieved from "https://parody.fandom.com/wiki/Dilbert?oldid=2335241"
Community content is available under CC-BY-SA unless otherwise noted.