Discovered as recently as 1994, the dingiso (Dendrolagus mbaiso) is a tree kangaroo, a group of animals that, like their well-known relatives in Australia, have long tails, well-developed hindquarters and move both hindfeet at the same time in a distinctive gait. However, unlike the kangaroos of Australia, tree kangaroos are, as their names suggests, adapted to living in trees. The soles of the dingiso’s large feet bear cushion-like pads covered with roughened skin which, in combination with the curved nails, provide proficient grip on tree trunks and branchea. The long, furry tail helps the dingiso balance as it moves through the trees, as well as bracing the animal as it climbs. The fairly long fur of the dingiso is largely black, apart from distinct white markings on the underparts and face. Female dingisos can be easily distinguished by the presence of a pouch on the abdomen, where the young grow and develop as they suckle milk from one of the four mammae. The scientific name of the dingiso is derived from two Greek words: dendron meaning tree and lagos meaning hare. The latter word came from European scientists in the 19th century who, whilst sailing through the region, tasted the flesh of a tree kangaroo and believed it to be reminiscent of the meat of hares. 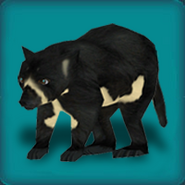 Retrieved from "https://parody.fandom.com/wiki/Dingiso?oldid=2630785"
Community content is available under CC-BY-SA unless otherwise noted.