Start a Wiki
Dinko is an alien. He is one of the protagonist of The show he was planned to invade the earth but he as a friendly interest to Tommy to help his life and he plans of the invade earth was deleted to help Tommy.

FUN TRIVIA 1.Dinko wore pot on head called Help hat an is activiated by presing a RED buton.  2. His appearence has been compare to Yosh from Suuper Maruo, The Popular Nitendo Game seires. 3. His gender is a male 4. 1 time he had dreams of as monster giant, much like Godzila. 5. His head shape makes him luke like a dinosaur. 6. His voiced by Charlie Adler, famuos for voicing characters like Buster Bunmy, Cow, Red Guy, Ed and bev Bighead background character 23242 from cartoon and Candy carmelita (us dub(step)) 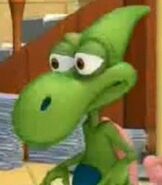 Plush
Add a photo to this gallery
Retrieved from "https://parody.fandom.com/wiki/Dinko?oldid=1576684"
Community content is available under CC-BY-SA unless otherwise noted.