A Disney Crossover parody with Sam Raimi's Spider-Man in 2002.

High-school senior Peter Parker is a school outcast and bully victim. On a school field trip, he visits a genetics laboratory with his friend Harry Osborn and unwitting love interest Mary Jane Watson. There, Peter is bitten by a genetically engineered "super spider." Shortly after arriving home, he becomes ill and falls unconscious. Meanwhile, Harry's father, scientist Norman Osborn, owner of Oscorp, is attempting to secure an important military weapons contract. He experiments on himself with an unstable performance-enhancing chemical. After absorbing the chemical, he goes insane, kills his assistant, and destroys the laboratory.

The next morning, Peter discovers that he is no longer near-sighted, and his body has metamorphosized into a more muscular physique. At school, he finds that his body can produce webs from the wrists, and his quickened reflexes enable him to avoid injury during a confrontation with Flash Thompson. Brushing off his Uncle Ben's advice that "with great power comes great responsibility," Peter considers impressing Mary Jane with a car. He enters an underground wrestling tournament and wins his first match, but the promoter cheats him out of his prize money. When a thief suddenly raids the promoter's office, Peter allows him to escape in revenge. Moments later, he discovers that Ben has been carjacked and shot, dying in Peter's arms. Overcome with anger and vengeance, Peter corners, subdues and tries to kill the carjacker, but hesitates when he sees it is the thief that he let escape. The thief attempts to flee, but trips and falls out a window to his death instead. Meanwhile, at Oscorp's chief competitor Quest Aerospace, during a weapon's test Norman kills several scientists and the military's General Slocum.

Upon graduating, Peter begins using his abilities to fight crime, donning a costume and the persona of Spider-Man. J. Jonah Jameson, a newspaper chief editor, hires Peter as a freelance photographer, since he is the only person providing clear images of Spider-Man, but writes stories that implicate Spider-Man in the crimes that he was actually stopping.

Norman, upon learning Oscorp's board members plan to sell the company, attacks them at the World Unity Fair; though Peter intervenes as Spider-Man, Norman still kills the board members. Jameson quickly dubs the mysterious killer the Green Goblin. The Goblin offers Spider-Man a place at his side, but gives him time to think about it. Meanwhile, after meeting Peter again, Mary Jane is followed by four men down an alley. As they corner her in attempt to mug and possibly rape her, Spider-Man comes to her rescue and she thanks him by kissing him. Afterwards, Spider-Man runs into the Goblin again, and refuses his offer. They fight, and Spider-Man is wounded. During Thanksgiving dinner, Norman sees the wound on Peter and realizes he is Spider-Man. Shortly afterwards, Mary Jane admits to Peter she is infatuated with Spider-Man, who has rescued her twice now, and asks Peter whether Spider-Man ever asked about her. Harry, who loves Mary Jane, arrives and interprets that she has feelings for Peter. Defeated, Harry laments to his father that Peter loves Mary Jane, unintentionally revealing Spider-Man's weakness.

The Goblin attacks Aunt May and later kidnaps and holds Mary Jane and a Roosevelt Island Tram car full of children hostage alongside the Queensboro Bridge, challenging Spider-Man to another confrontation. He forces Spider-Man to choose whom to save, and drops Mary and the children. Spider-Man manages to save both Mary Jane and the tram car, while the Goblin is pelted and heckled by civilians who have sided with Spider-Man. The Goblin then redirects the fight into an abandoned building where they engage in a lengthy and brutal battle. When Spider-Man manages to overpower the Goblin, Norman reveals himself to halt the fight. He begs for forgiveness, but at the same time programs his glider to impale his foe from behind. Sensing the danger, Spider-Man instinctively dodges, and the glider impales Norman. As he dies, Norman asks Spider-Man not to tell Harry of the Green Goblin's identity. Harry arrives to find Spider-Man standing over his father's body and incorrectly believes him to have murdered his father.

At Norman's funeral, Harry swears vengeance toward Spider-Man, and asserts that Peter is all the family he has left. Mary Jane confesses to Peter that she loves him. Peter, however, feels that he must protect her from the unwanted attentions of Spider-Man's enemies. He hides his true feelings, and informs Mary Jane that they can only be friends.

Wasabi
Joseph Robertson
Add a photo to this gallery

Yokai as Green Goblin
Add a photo to this gallery 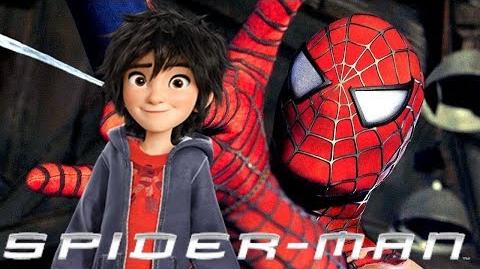 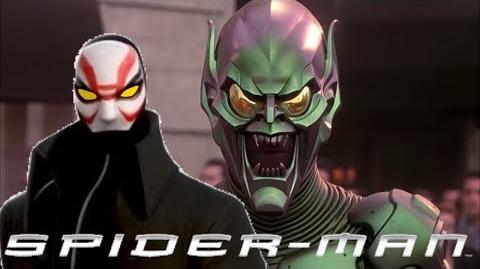 Retrieved from "https://parody.fandom.com/wiki/Disney•Pixar%27s_Spider_Man_(2002)?oldid=2068579"
Community content is available under CC-BY-SA unless otherwise noted.