A Disney Crossover parody with Sam Raimi's Spider-Man 3 in 2007.

Peter Parker plans to propose to Mary Jane Watson, who has just made her Broadway musical debut. A meteorite lands at Central Park, and an extraterrestrial symbiote follows Peter to his apartment. Harry Osborn, seeking vengeance for his father's death, attacks Peter with newly-made weapons based on his father's Green Goblin technology. The battle ends in a stalemate, with Harry receiving amnesia, erasing his memory of Peter as Spider-Man as well as his vengeance. Meanwhile, police pursue escaped prisoner and robber Flint Marko, who is determined to see and save his dying daughter. Marko ends up falling into an experimental particle accelerator that fuses his body with the surrounding sand, transforming him into Sandman.

During a festival honoring Spider-Man, Peter kisses Gwen Stacy for show, infuriating Mary Jane. A newly superpowered Marko robs an armored car and Spider-Man confronts him. Initially warning him to leave to avoid battle, Marko easily subdues him and escapes. NYPD Captain George Stacy informs Peter and Aunt May that Marko was Uncle Ben's true killer; the deceased Dennis Carradine was Marko's accomplice. While a vengeance-obsessed Peter sleeps in his Spider-Man costume, the symbiote assimilates his suit. Peter later wakes up and discovers his costume changed and his powers enhanced; however, the symbiote brings out Peter's dark side. Wearing the new suit, Spider-Man locates Marko and battles him in a subway tunnel. He discovers that water is Marko's weakness, so he breaks a water pipe to reduce Marko to mud, washing him away and believing him dead.

Peter's changed personality alienates Mary Jane, whose career is floundering, and she finds solace with Harry. Harry recovers from his amnesia, and urged by a hallucination of his father, blackmails Mary Jane into breaking up with Peter. After Mary Jane tells Peter she loves somebody else, Harry meets with Peter and claims to be "the other guy". Later, Peter, wearing the black suit, confronts Harry about forcing Mary Jane to end her relationship with him and spitefully tells Harry that his father never loved him. Another battle ensues, where Harry throws a pumpkin bomb at Peter, who deflects it back, disfiguring Harry's face.

Under the symbiote's influence, Peter exposes photography rival Eddie Brock by proving his fake photos depicting Spider-Man as a criminal. Soon afterward, to make Mary Jane jealous, Peter brings Gwen to the nightclub where Mary Jane now works, but Gwen catches on and leaves. Peter brawls with the bouncers and, after accidentally attacking Mary Jane, realizes the symbiote is corrupting him. Retreating to a church bell tower, he discovers that he cannot remove the suit, but the symbiote weakens when the bell rings. Peter removes the symbiote and it falls to the lower tower, landing on Brock, who had been praying for Peter's death. The symbiote bonds to Brock's body, transforming him into Venom. Brock locates Marko and convinces him to join forces to defeat Spider-Man. Brock then hijacks a taxi with Mary Jane on board and hangs it as bait from a web above a construction site eighty stories high while Marko keeps the police at bay. Peter seeks Harry's help, but is rejected. While Peter battles Brock and Marko, Harry learns the truth about his father's death from his butler, and goes to help Peter as he is being overpowered, resulting in a battle between the four. Harry subdues the Sandman before assisting Peter against Brock. In the ensuing battle, Brock attempts to impale Peter on Harry's glider but Harry intervenes and is impaled himself. Recalling the symbiote's weakness, Peter assembles a perimeter of metal pipes to create a sonic attack, weakening Venom and allowing Peter to separate Brock and the symbiote. Peter activates a pumpkin bomb from Harry's glider to destroy the symbiote but Brock dives in and the bomb kills them both.

Marko explains to Peter that he committed robberies to save his dying daughter and reveals that while Ben was convincing Marko to go home after getting him out of his car, Carradine hit Marko's elbow, shooting Ben accidentally, plaguing Marko with guilt. Peter forgives Marko, who dissipates and floats away. Peter and Mary Jane witness Harry, who dies beside them. Peter, Mary Jane, and Aunt May attend Harry's funeral. Meanwhile, at the nightclub, Peter and Mary Jane reconcile. 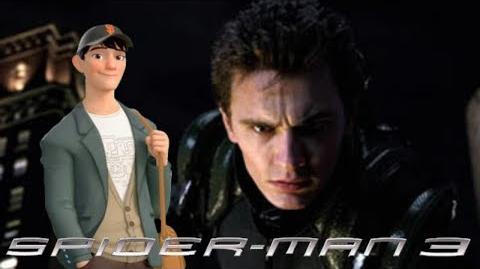 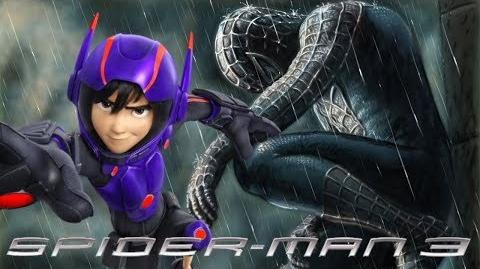